Home > Cyprus > 4 Top Challenges of Starting a Business in Cyprus 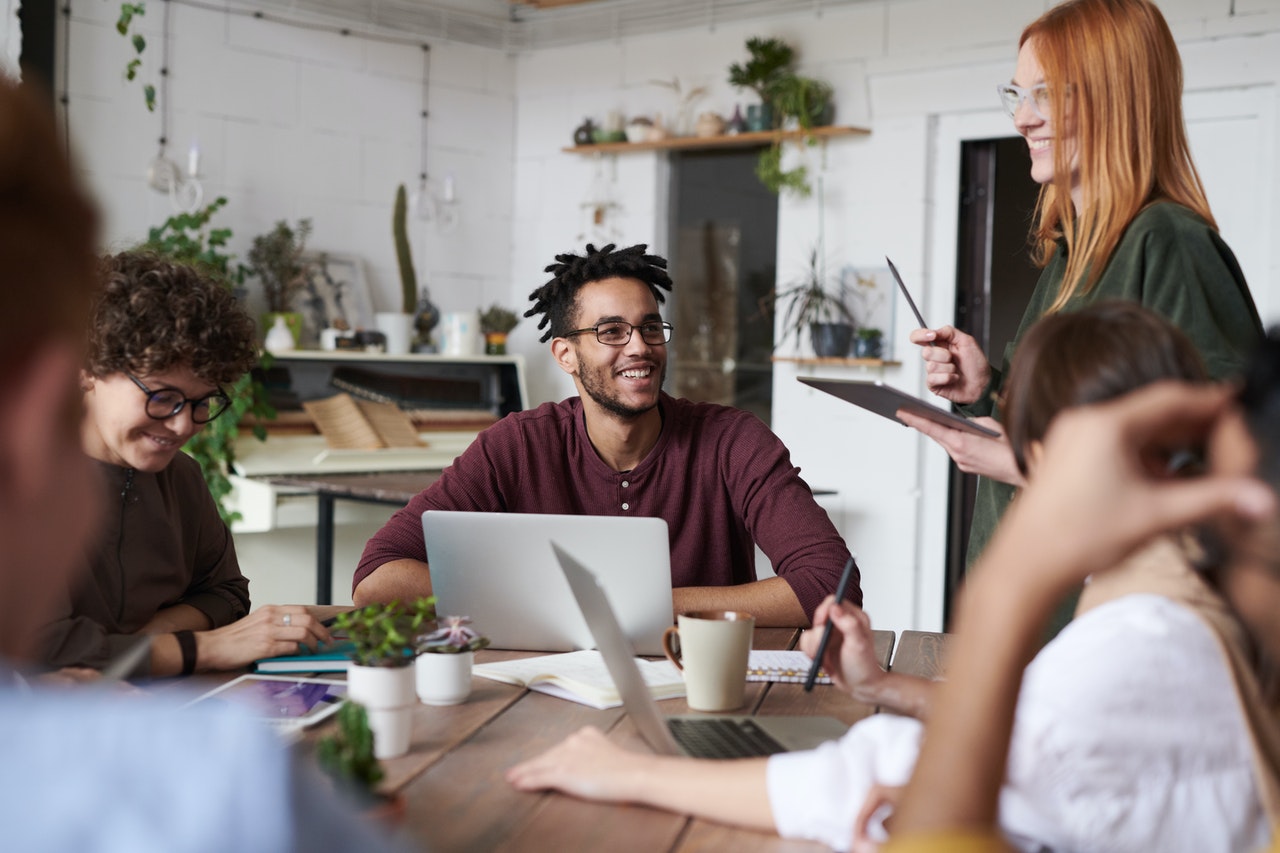 In 1974, Greek Cypriot nationalists and Greek military junta staged a coup d’état in order to unite the island with Greece. This led to fierce retaliation from the Turkish army, with major damages and losses to infrastructure. It is estimated that 70 percent of the island’s wealth-producing resources were lost. The loss of the port of Famagusta and Nicosia International Airport remain as losses to the conflict. To date, Nicosia International Airport remains closed and serves as the headquarters for the United Nations Peacekeeping Force. An estimated 4% of the country’s land area is taken up by the United Nations buffer zone. With such a troubled history, the country has struggled to develop its business and economic regulatory systems, creating challenges to setting up a company in Cyprus. Despite this, overcoming these challenges will be very rewarding since they are part of the Eurozone, and thus benefit from the high and transparent standards of regulations that are set by the European Union. This would empower your business to capitalize on the good business environment arising from these regulations, or even for it to serve as a starting point for further expansion into the European Single Market. Tetra Consultants is experienced in helping our international clients to register company in Cyprus and overcoming the various challenges that come with starting a business in Cyprus in 2021. We aim to have their company operationally ready in 6 weeks without requiring them to travel so that they can have a hassle-free experience of registering their Cyprus limited liability company or Cyprus holding company, whichever they may choose. 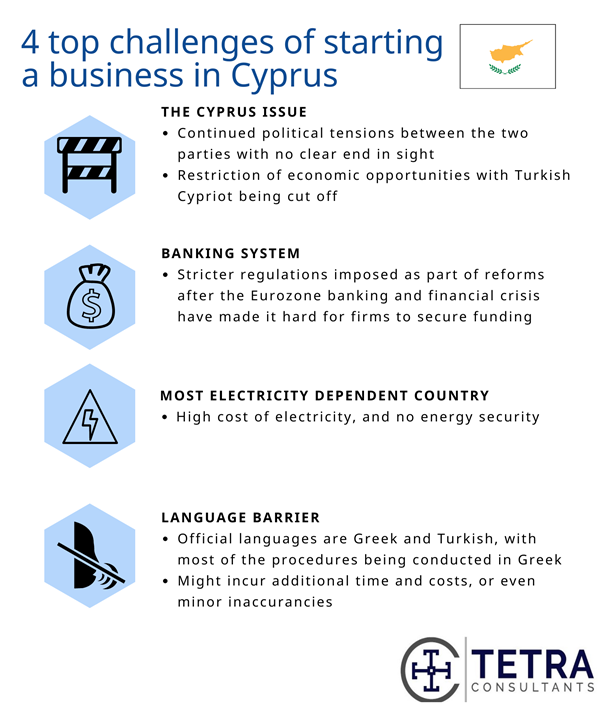 Beginning as early as 1931 over opposition to British rule, the conflict hit its peak in the 1950s to 1970s as various paramilitary organizations were formed and coup d’états were staged. Since then, ties between Northern Cyprus and the Republic of Cyprus have mellowed, with a total of nine crossing point established between the two countries. However, with the United Nations peacekeeping force still maintaining a significant presence on the island and many international observers finding the likelihood of a reunification deal extremely unlikely, it seems that political tensions will continue to affect the country in the years to come.

In recent years, the discovery of offshore natural gas reserves in an area within the Republic of Cyprus’ exclusive economic zone known as Aphrodite or exploratory drilling block 12 has threatened to inflame existing tensions between the countries, with the Turkish Navy supposedly threatening to mobilize its forces if Cyprus proceeded with plans in the area. In 2019, the Turkish oil and gas drilling ship Fatih reignited tensions by conducting drilling operations within the area. With Turkish and Greek naval assets nearby, along with that of the United States, United Kingdom and Russia, the situation in Cypriot waters seems especially volatile.

These tensions would pose a definite challenge to starting business in Cyprus as well. As seen by how the Hong Kong riots caused a 4.8% shrinkage in the country’s Hang Seng Index and the closure of its airport and other crucial infrastructure, military conflict or the mere threat of it could have similarly damaging effects on your Cypriot business. The volatility of the situation would also make it hard to accurately craft your business’ plans for the long term.

Lastly, the division of Cyprus has cut off Turkish Cyprus from the Republic of Cyprus. Hence, it might be hard for you to create economic opportunities given that the country’s already small population has been further reduced. This might thus lead to reduced opportunities in economic growth, trade and investments, and make it hard for the movement of goods and human capital across the buffer zone. Given that Turkish Cyprus is only recognised by Turkey, we would not recommend you invest or register your Cyprus company there.

Cyprus was also affected as part of the larger Eurozone financial and banking crisis in 2012, with the three largest banks in Cyprus, Bank of Cyprus, Cyprus Popular Bank and Hellenic Bank requiring bailouts in order to stay afloat. Eventually, a bailout package of €10 billion was given by European Commission, European Central Bank and the International Monetary Fund. Despite Cyprus’ subsequent recovery from the crisis, it did leave some permanent effects on the country, with the country’s second largest bank, Cyprus Popular Bank being forced to close.

As part of the conditions for receiving these bailout packages and loans, Cypriot banks had to become significantly stricter. With restrictions on how much leverage they could take on and stricter lending criteria, it has become significantly harder for firms to secure credit, with the country being ranked 80th in terms of the ease of “Getting Credit” based on the World Bank’s 2020 Ease of Doing Business index. This would make it harder for firms to acquire the necessary capital to expand their business activities.

Cyprus has the dubious honour of being the most electricity dependent country in the European Union. This is due to the fact that before the Aphrodite oil fields, there were no natural energy resources within the country. This meant that they had to import close to 95% of their electricity requirements, which was also made more difficult by the fact that they are the only country to be completely isolated from EU energy interconnections. All this has led to electricity prices in Cyprus being one of the most expensive within the European continent.

Although the EuroAsia Interconnector is expected to ease such electricity woes, it is only expected to be completed in 2023, implying that such issues would continue to last for 2 more years. All this has led to them being ranked 75th in terms of the ease of “Getting Electricity” according to the World Bank’s 2020 Ease of Doing Business index. Not having ready and cheap access to electricity would thus make it hard for businesses to operate.

Although around 80% of the population speaks English, the fact that Greek and Turkish are the official languages of the country mean that they are the default and main languages that are used for governmental systems, procedures and projects. This might make it hard for communication between your business and its business partners or customers, and also incur additional cost and time in hiring official translators for certified translation of the necessary documents. More importantly, translation might also create minor inaccuracies that distort the actual meaning, leading to misunderstandings.

How can Tetra Consultants assist you?

Cyprus business set up can be hassle-free if you are familiar with the process. With Tetra Consultants at the wheel, you will be able to channel your time and energy into other more important aspects of your global business.

With our lean-and-mean mentality, you can rely on our team of experts to provide you a seamless experience throughout the whole process of Cyprus company registration. Our ultimate goal is for your Cyprus company to be operationally ready within the stipulated time frame of 6 weeks.

Our service package includes everything you will require for setting up a company in Cyprus:

Contact us to find out more about how to register a business in Cyprus. Our team of experts will revert within the next 24 hours.