Home > Indonesia > 7 Advantages of Setting up Business in Indonesia

Indonesia is one of the world’s fastest-growing economies. The economic growth has been more than 5% in the past 10 years and it is expected to continue growing in the next few years. With a robust economic background, starting a business in Indonesia is ideal. In this article, our team at Tetra Consultants has highlighted 7 advantages of setting up business in Indonesia once you decided to register company in Indonesia. 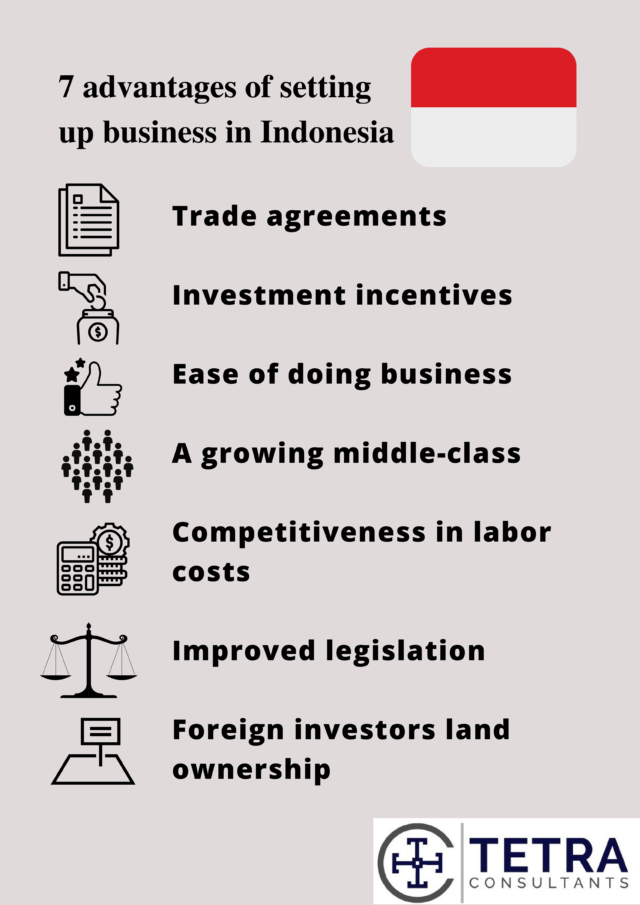 In order to remain competitive and increase Indonesia’s economic growth, there are several trade agreements that were signed by the government.

Until now, there are still trade agreements being signed in Indonesia. A few of the most recent ones would be the Indonesia-Australia Comprehensive Economic Partnership Agreement (IA-CEPA) and the historic signing of the Regional Comprehensive Economic Partnership (RCEP) that came into effect in 2020. The latter involves fifteen countries including 10 ASEAN countries along with New Zealand, Australia, China, Japan and South Korea. This is very advantageous as it is one of the biggest trading agreements of the world, approximately one-third of the global economy. Hence, if you are deciding where to open a trading company, Indonesia may be an ideal place for such purposes due to its trade agreements.

The corporate tax rate decreased from 25% to 22% from 2020 to 2021 and is planned to further reduce to 20% in 2022. Hence, with a lower tax rate, your profits will be higher and this allows the setting up business in Indonesia to be more attractive for foreign investors.

Apart from the reduction of the corporate tax rate, export services that are produced in Indonesian territory are eligible for zero-rated value-added tax (VAT). Businesses in R&D industries and trailblazing industries are eligible for a 300% reduction in gross income and a 60% reduction in net income respectively. In addition, businesses operating in one of the 13 special economic zones in Indonesia can enjoy fiscal and non-fiscal incentives.

There are also fiscal and non-fiscal incentives for businesses that operate in one of the 13 special economic zones available in Indonesia.

Indonesia is ranked 73 out of 190 economies for the ease of doing business according to the World Bank in 2020. This is due to the openness to foreign investment in Indonesia and the implementation of government initiatives.

Previously, the company registration process in Indonesia was a long process that took at least two months. However, there is an improvement to the company registration now as the process is now reduced by half a month. Apart from the time taken to register a company in Indonesia, the process is now significantly simplified now as there is no longer the requirement to submit Company Domicile (SKDP) with effect from May 2019. The SKBP was a document that includes a company’s domicile address that is used to apply for business licenses, tax identification numbers, etc.

With the new Online Single Submission (OSS) system, businesses are able to immediately start their operations as a Business Identification Number (NIB) can be obtained through the system without being required to obtain additional licenses. This applies to selected business sectors such as call centers, event organizers, ticketing in travel agencies and education and/or training.

Lastly, the Investor KITAS allows for foreign investors who are shareholders, directors or commissioners to start work immediately if they meet the requirements of invested shares. Furthermore, there are other advantages such as easy application and waiver of work permit government fee (DPKK).

Indonesia has been trying to mitigate the problem of corruption which has been a prevalent problem in Indonesia. In order to do so, Corruption Eradication Commission (Komisi Pemberantasan Korupsi – KPK) was established to combat corruption. Additional steps such as the signing of the United Nations Convention Against Corruption (UNCAC) and the National Strategy of Corruption Prevention and Eradication 2012-2025 have been taken as well.

Since then, the corruption situation in Indonesia has been gradually improving over the years according to the Corruption Perceptions Index.

You will be able to apply for the right to build (Hak Guna Bangunan – HGB) with a PT PMA. The land certificate will state the name of PT PMA where the company will be granted legally protected ownership. The HGB enables the company to construct property and generate income through the sale or rent of the property.

Whereas the freehold title or right of ownership (Hak Milik – HM) is only for Indonesian citizens. However, foreign investors with PT can secure the HM under a local nominee arrangement.

There are many advantages to setting up business in Indonesia. However, to fully understand whether it is suitable for your business, you may wish to engage Tetra Consultants for advice. With Tetra Consultants by your side, the registration process of your business in Indonesia will be smooth and hassle-free. Our comprehensive service package includes planning and strategizing with our clients to select a suitable business entity, completing the registration process, obtaining required licenses, opening a corporate bank account, and ensuring your compliance with the government regulations.

Contact us to find out more if you would like to register business in Indonesia and our dedicated and experienced team will revert within the next 24 hours.