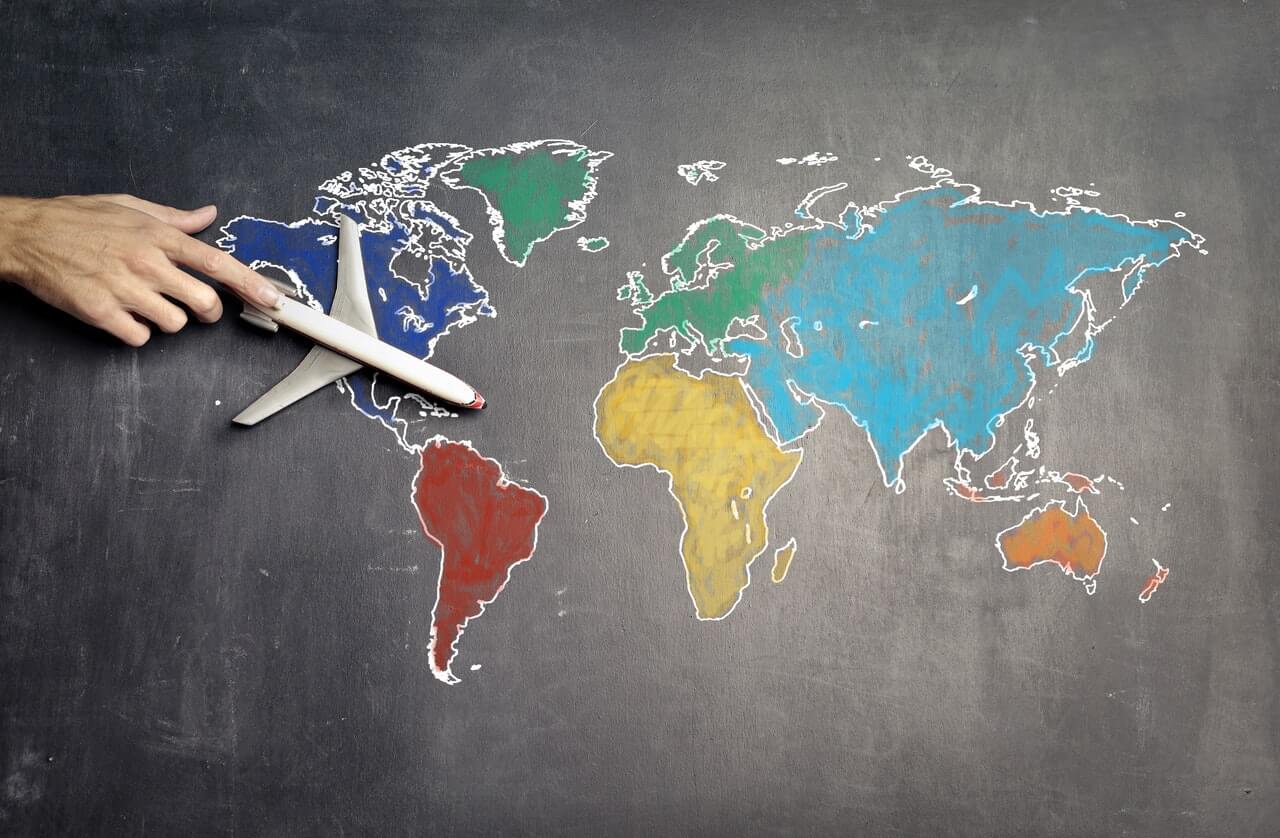 Paying income taxes can be quite expensive, depending on where you live. However, some countries do not levy an income tax on their residents. Whether you are considering offshore company setup or applying for permanent residency in a foreign country, one of the key factors to take into account is comparative tax rates. This article presents you with a list of countries without income tax. 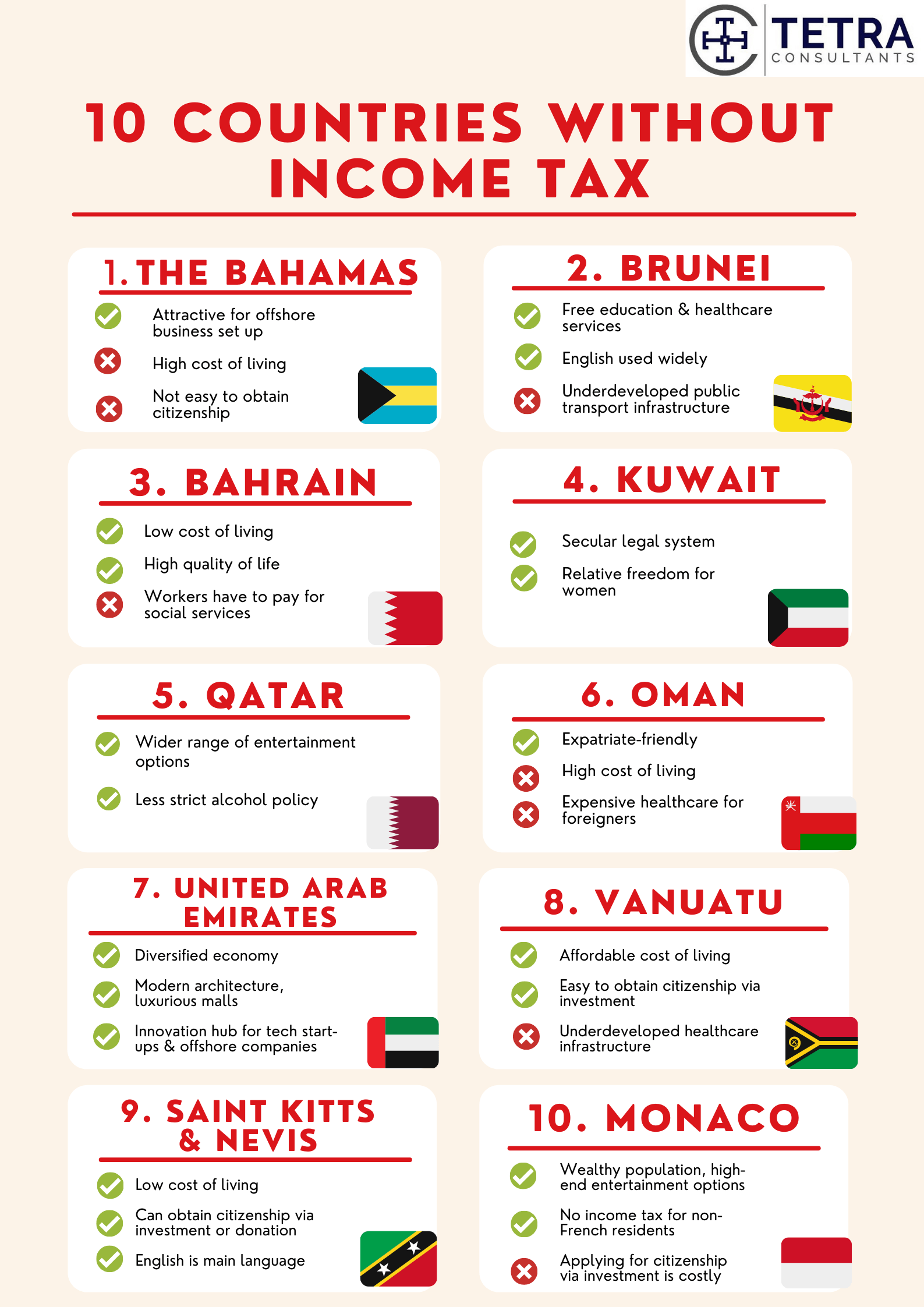 The Bahamas is located on the northwestern edge of the West Indies in the Atlantic and gained independence from the British crown in 1973. Although residents in the Bahamas do not need to pay any income tax, the cost of living can be expensive due to the higher prices of goods and services in the country. Moreover, it is not easy to obtain citizenship in the Bahamas due to the strict requirements. However, the beautiful scenery and the pristine white beaches, together with the appealing tax rates, have attracted many foreigners to live in the Bahamas. The Bahamas is also an attractive location for offshore business setup.

Located on the northern coast of the island of Borneo in Southeast Asia, Brunei is a wealthy country with an economy that relies heavily on exports of crude oil and natural gas. Besides having no income tax, Brunei also provides free education and healthcare services to all citizens and permanent residents. Although the official language in Brunei is Malay, English is widely used as the spoken and written language in businesses and schools. Brunei has the highest car ownership in Asia, and this could contribute to the underdevelopment of public transport infrastructure in the country.

Like Brunei, Bahrain is able to offer zero income tax for both locals and expatriates due to the high profitability of the oil industry in the country. However, workers in the country do have to pay a small amount of their income for the social services in Bahrain under the Social Insurance Organisation (SIO) rules.

Bahrain is well-known for its low cost of living and high quality of life. Although there are still many conservative practices in the country, Bahrain is considered to be much more open and tolerant than its Arab neighbours. Women are allowed to drive, vote, and run for office in Bahrain, and there are fewer restrictions in their attire.

Located in the Middle East, the high level of wealth accumulated from Kuwait’s oil industry allows the country to enact zero tax rates. Kuwait is also considered to be more liberal than most other Arab countries, as the legal system in Kuwait is largely secular and women enjoy more rights and freedom.

Qatar is another wealthy nation in the Middle East that does not require its citizens to pay income tax. Compared to some of its neighbours in the Gulf, Qatar provides a relatively wider range of entertainment options and has a less strict policy towards alcohol consumption. Although alcohol consumption is forbidden for locals, foreigners who have a permit can purchase alcohol and consume them in the privacy of their homes.

Like Bahrain, Kuwait and Qatar, Oman is a wealthy Middle Eastern country that offers zero income tax to its residents. Oman has a generally welcoming culture to foreigners and the number of expatriates in the country makes up around 40% of the population. However, the cost of living in Oman is relatively high and healthcare can be quite expensive for foreigners.

Despite having a large oil-exporting industry, the UAE economy is attempting to shift its focus towards the tourism and business sector and is currently one of the most diversified economies in the Middle East. In particular, Dubai, the most populous city in the UAE, is well-known for its modern architecture and luxurious shopping malls. Dubai is also well known as an innovation hub and has remained an attractive location for tech start-ups pursuing offshore company incorporation.

Located in the South Pacific Ocean, Vanuatu’s economy relies heavily on its agriculture sector and is considered a lower-middle-income country by the World Bank. Although the country’s underdeveloped healthcare infrastructure is a cause of concern for foreigners seeking to reside in the country, the cost of living is relatively affordable. It is also easy to obtain Vanuatu citizenship through the investment program. By investing $130,000 in a local development fund, an individual can obtain Vanuatu citizenship in less than 2 months. The citizenship fee required for a family of four is $180,000.

Saint Kitts and Nevis is a small sovereign state in the West Indies with a population of around 53,000. It is easy to achieve a luxurious lifestyle in the country due to the low cost of living. Similarly, an individual can attain citizenship by investing in real estate or donating to an approved fund in the country. The country’s growing economy is heavily reliant on both the tourism and agriculture sector, and English is the main language of communication in the country.

Monaco is a sovereign city-state located in Europe and has one of the wealthiest populations in the world. Almost one-third of the population in Monaco are millionaires and all residents are not required to pay income tax unless they are of French nationality, whereby they will then be subjected to French income tax. The process to acquire citizenship in Monaco can be costly if you are applying through investment, and you may be required to invest at least a million euros in real estates. Monaco is well known for the luxurious and lavish lifestyle of its people and its high-end entertainment options.

How do I choose which countries without income tax?

Paying taxes can be quite expensive, depending on where you live. This has led to the search for tax havens for both individuals and businesses. If you are seeking to set up an offshore company in a country, it is not only important to consider the cost of the offshore incorporation services and offshore bank account setup, but also necessary to consider both the corporate and income tax rates in the country. This is especially true if you are planning to become a permanent resident there, as a low tax rate can greatly reduce your disposable income.

While the process of offshore company setup is relatively easy for most jurisdictions, it can be difficult to choose which jurisdiction best suits your business model. Tetra Consultants provides you with advice and guidance on the most optimum countries without income tax based on the unique needs and goals of your business.

Contact us for a free consultation and our team of experts will revert within the next 24 hours.