You may wonder is BVI a tax haven? In fact, the British Virgin Islands (BVI) ranks first as the world’s top tax haven, holding more than 5,000 times the value of what its economy should hold. Hence, it is proven to be one of the most ideal places in the world for establishing an offshore business. In this article, our team at Tetra Consultants has highlighted the top 5 things you should know before you register company in BVI 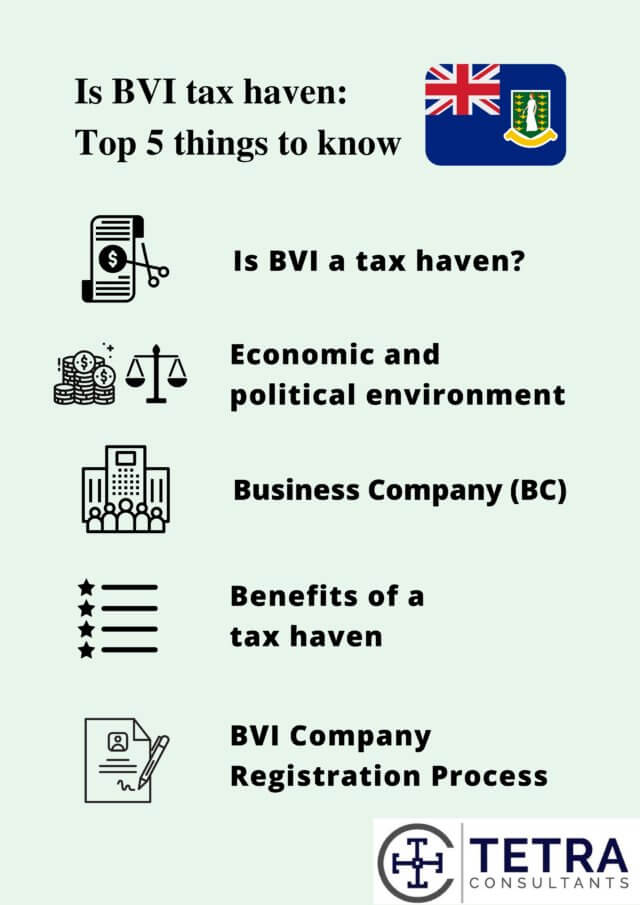 Is BVI a tax haven?

To reduce dependency on other countries whilst depending on their own economy, many countries were motivated to become tax-havens. A tax haven is where a country offers businesses and foreign investors with low or no tax liability, enabling it to be an attractive jurisdiction to incorporate businesses.

Whilst money laundering may be a concern in BVI, there were measures taken such as the signing of Common Reporting Standards (CRS) in 2017 and it continued to adhere to the international guidelines on KYC laws and money laundering initiatives. In addition, the new Beneficial Ownership Secure (BOSS) Act was passed, and beneficial owners can no longer remain anonymous when they are uploaded into the government’s registry.

BVI is democratic and a politically stable economy with no territorial threats or internal tensions within the jurisdiction. BVI is also business-friendly, offering low fees for company registration and yearly renewals. It is more affordable to start a business in BVI compared to other jurisdictions. The lower incorporation fee allows you to channel this fund into other aspects such as expansion through capital investments.

BC is a company with limited liability. Since it is a separate legal entity, owners are not liable for the debts and obligations of the company. There are no restrictions for the requirement of at least one director and one shareholder, thus the position of the director and shareholder can be held by the same person. The quick incorporation in the span of 2 to 5 business days makes it a preferred choice by many investors to enjoy the full tax exemption on profits or capital gains generated from outside of the BVI. In addition, the minimum paid-up capital of US$1 is required. The information and details on directors, officers, and shareholders are not required to be filed with the BVI Register of Companies. There is also minimal compliance requirements and no reporting requirements. Hence, privacy is one of the key features of BC in BVI.

Another advantage would be the absence of exchange controls. Hence, funds can be transferred between different countries for trading and investment purposes while financial privacy is protected.

Benefits of a tax haven:

One of the BVI company advantages would be its tax-free nature. Leading accounting and legal businesses internationally enjoy a strong reputation in the BVI. The BVI has also been involved in around 115 Tax Information Exchange Agreements (TIEAs), with countries including China, Japan, United States, India, and Germany, allowing countries to exchange information on tax-related matters formally.

Even though BVI is a relatively smaller country, it has a relatively higher per capita GDP, which exceeds US$43,000. Furthermore, the political stability in BVI is well-known.

Once you have considered and decided to open company in BVI, you may proceed with the preparation. The steps to BVI company registration are as follows:

Step 1: Planning of your business idea

Step 3: Reserving of the company name and registration through BVI Commercial Registry

Is BVI a tax haven? After reading this article, you would have found out that BVI is the world’s top tax haven. If you have decided to start a business in BVI but are unsure of what to do, you may engage the service of Tetra Consultants. With Tetra Consultants by your side, the registration process of your business in BVI will be smooth and hassle-free. Our comprehensive service package includes planning and strategizing with our clients to select a suitable business entity, completing the registration process, obtaining required licenses, opening a corporate bank account, and ensuring your compliance with the government regulations.

Contact us to find out more about BVI company registration and our dedicated and experienced team will revert within the next 24 hours.